This post is actually one I wrote a while back as a guest post for a peer’s blog whom I admire very much.  However as life goes, she has had some more pressing family matters to attend as of late to and I am not sure this post will make it to her blog anytime soon.  But I at least wanted to share with my followers because as many of you know, our family just went through a big move and a lot of change ourselves.  I plan to try to express what all this change has meant to me in a later post, but this little bit is a good start because it lets you know a little more about where I have come from. 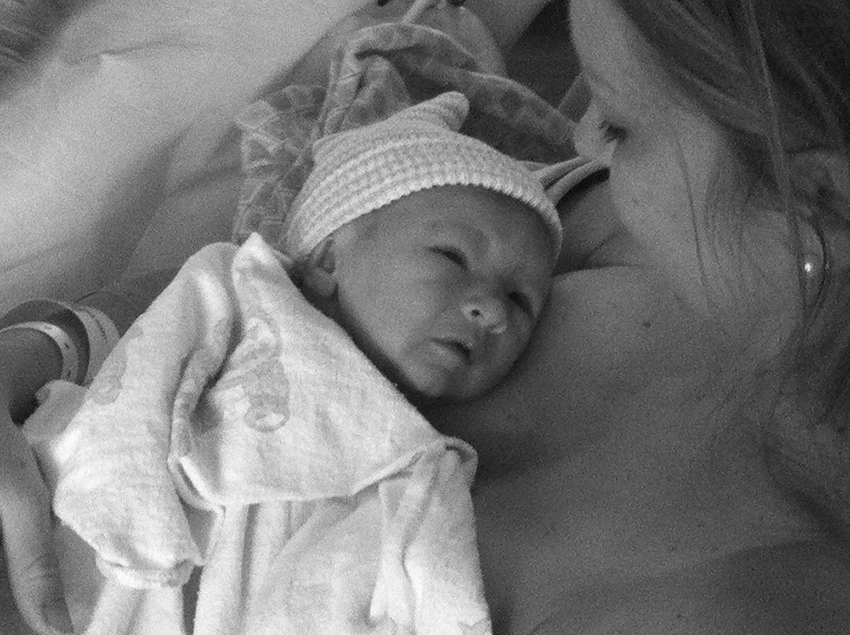 the day I became a mother: May 2, 2011
In modern times, the paradox of having a traditional career and being a traditional mom is not a topic that goes un-debated amongst the media, our peers, and contemporaries.  It is something I have struggled with on and off in various points my own motherhood journey thus far.  And I am sure I will continue to mull it over in one form or another for the duration of my children’s childhood. There are a few things I do know for sure.  First, our mothers and grandmothers before us bestowed upon us both a blessing and a curse. 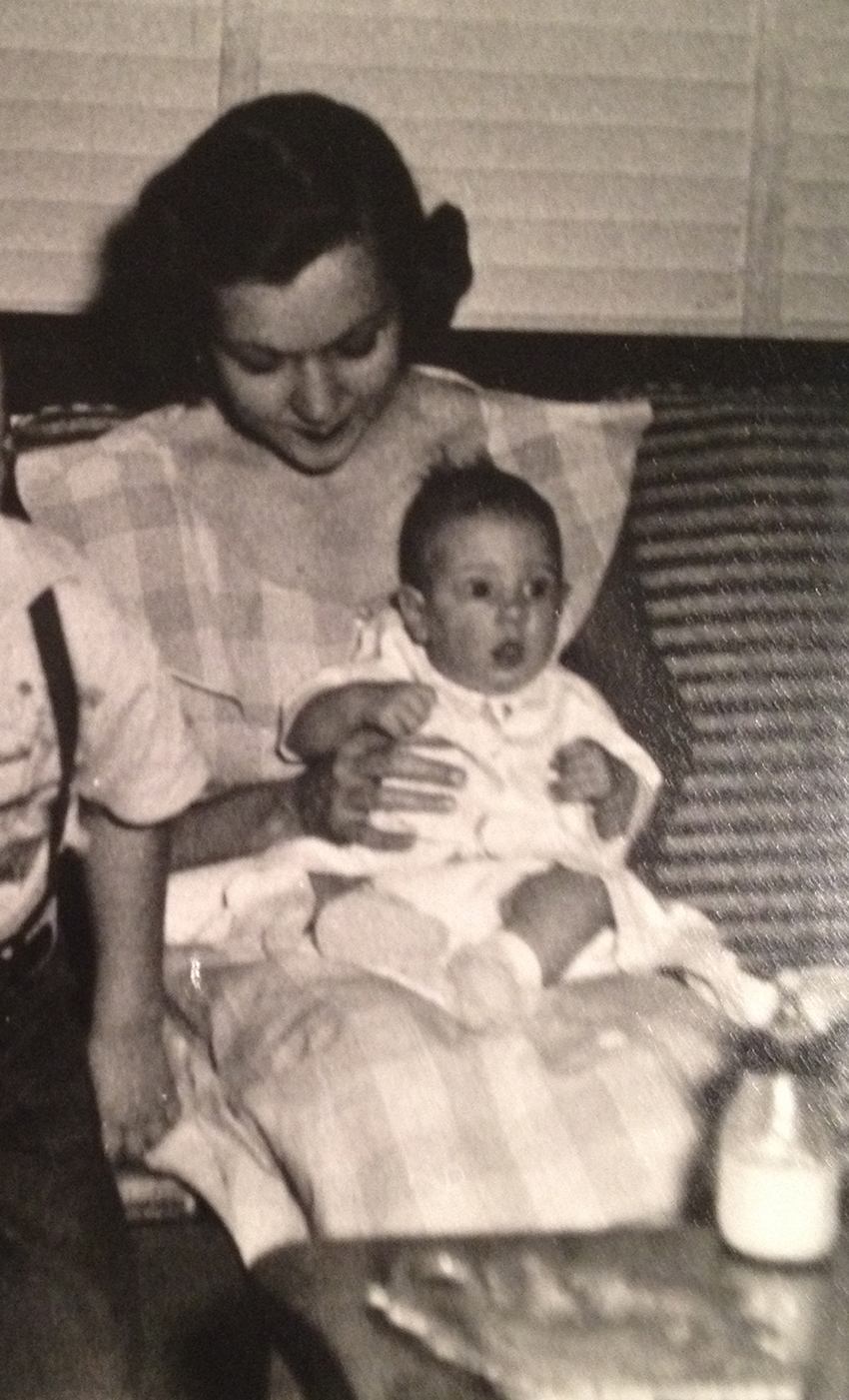 all of my mother’s baby pictures were lost in a childhood move.  this one of my Grammy and her survived from an extended relative’s snapshot.
My Grammy on my mother’s side got married at 19.  After graduating college early, she started in medical school, but when she and my Gramps decided to start their family, she dropped out because that was the only choice she had as a woman in the 1950s: family OR career.  She regretted not pursuing her medical career always and because of it, raised her children with the ever-present requirement that a high level of education was of the utmost importance to their future success.  It was no accident that my mother became a lawyer (her brother, a doctor).  My mother was so influenced by my Grammy’s regrets that she decided at a young age she would never have children of her own.   (Thankfully that changed when she met my dad!)  Even then, my mom’s career came first.  As a child, I had a hard time understanding why she could not be a “room mom”  in my classroom or pick me up every day from school or take me to dance class.  I wanted her there like all the other moms.  I know she has her regrets.  But now, I not only understand, but I have the utmost respect for the choices and sacrifices she made for us.  I am immensely proud of her. 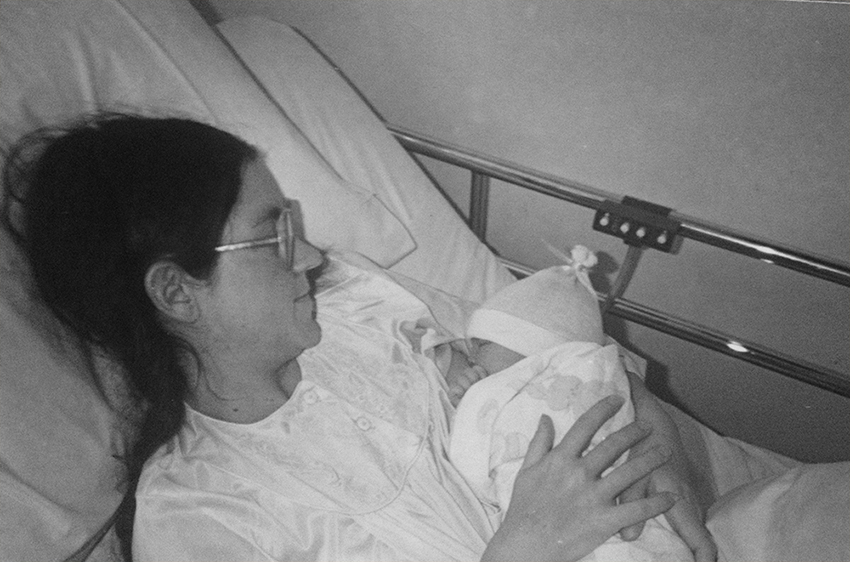 the day my mother became a mother: January 21, 1983
What a blessing that we, as women today now have the ability to have a family AND the choice to stay at home with our babies or to go to contribute in the workforce.  However it is no longer so black and white as it was for my Grammy.  Some of us also have the choice to work part time, to work from home, to start our own businesses or make our own hours.  We want to be the attentive, involved parents that perhaps we felt we did not have. We want to do it all.  And therein lies the curse.  We have so many options, but no road map to navigate us through the complex options of raising children.  It can be overwhelming when there are so many ways to do it, so much information at our fingertips, but no one to tell us exactly what is right for each of our families.  And not to mention the financial stress of deciding one income or two.  While women still get paid less than men for equal work, many women today make more than just the offset of childcare, making their income essential to the family.  We still each have to figure it out on our own.  And no matter which path one may choose, being a mother is just not easy.  It is just not.
The second thing I know for sure, if motherhood so far has taught me anything with undeniable certainty, it is that the only constant in life is change.  This is one of those sayings my parents told me that I did not really understand as a child.  As I grew up, I had glimpses of this lesson here and there.  But nothing like the warp-speed pace of raising a baby (and now two).  Right around the time my son was born, I really contemplated the notion of being a stay at home mom.  Prior to that time, I always thought I would be a career mom, because my mother was such a good role model for me.  But once I finally had that baby in my arms, I had a lot of anxiety about someone else caring for, and essentially raising him.  At the time, I did not really have the choice because financially- I needed to go back to work.  So I did, after the standard three months of maternity leave.  I struggled.  A lot.  It was chores, chores, chores, and work, and pick-ups, and drop-offs and go, go, go, from before the sun came up until long after it went down.  I probably took on too much.  I wanted to prove to myself I could do it all.  Work full time!  Run marathons!  Raise a healthy child on breast milk and organic, whole, homemade food only!  Even though the baby was sleeping through the night, I got very little sleep for weeks and months on end.  I got postpartum depression.  I ended up quitting my job and getting a new one.  But gradually, things my antidepressant info got better.  The fog lifted and I started to see the glimmers of my former self I was so desperately seeking.  I loved my new job and my baby turned into a toddler and we found a new groove to life.  I decided the career mom route was the way for me after all.
When I became pregnant again, I thought, “now, I’ve got this.”  There are a lot of things I learned about parenthood from my first- a lot of things I am better at now with my second.  But nothing like a second child to turn you on your head all over.  In some ways, everything is different. But it also brings up some of the same self-doubting motherhood questions again.  Am I doing what is best for my children?  Are they happier at daycare and preschool than they would be home with me?  Am I happier?  Questions I thought I had the answers to, but still leave me guessing at times.  As of now, I believe I will always need to do some type of work that is outside of raising my children.  It is a selfish time I need for myself so that I can exercise my brain.   And that helps me to be the best, most fulfilled mother and wife I can possibly be when I am with my family.  I suppose I have just been thinking more lately about what that work/life elusive notion of “balance” should look like for our family.  Sometimes, I wish I had someone who could tell me exactly what to do at this juncture.  Which is the right path?  Which brings me back to the third thing I know for sure: ultimately, I still have to figure this out for myself.  Luckily, I get to do that with the support of my family.  And I know no matter how we make it work, it will work.  And in the end we will (hopefully) all be better for it.